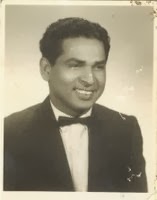 Foreword for ‘Man-Management’ by K.X.Augustin
After all these years, I have remained the true to my father.
As I young boy I feared and obeyed him. I remained so in my teens. But unfortunately when I came to know him and I became his friend and confidant – he was dying.
He was dying for all the years of my teens. He got his first heart attack when I was 15 and from thereon it was downhill because of his diabetic complications.
I had to grow fast – and learn fast from a dying man. And the influence was permanent.
In all that I do, in business, in personal interactions and in my leisure – he greatly influences me.
When my wife, Sabina saw his albums on Czechoslovakia that he made in the late 60s after his 2 years stint there – her first reaction was – “Now that explains where you got your creativity!”
“Man-management” was written in his last days. He spent precious money on the last edition whose production was a disaster and my father, in his typical style, never spoke a word about the loss.
When the book was first being entered into a computer almost 20 years back, was the first time I saw a computer. I wonder what the software and hardware was.
Anecdotes from this book like the girl who is late to school tells her friend, that “we should run and pray” to phrases like ‘nip in the bud’ and like the father who wishes that his son grow , among all things aside, into a ‘good man’, tactical ways of complimenting someone, not sending written memo to reprimand someone, and tips like ‘why wake up a man only to tell him that he has no dinner’  – this book has had a significant impact on my adult behavior.
This book is a birthday gift to my father. I have it archived on Google with a hope that it stay there forever and guide my children, my nephews and niece and future generations.
Xavier Augustin
18 May 2006
Read the book online